The content is also available in the following languages: 简体中文, 繁體中文

At the 2017 and 2019 Belt and Road Forums for International Cooperation, China promoted its commitment to anti-corruption principles in BRI projects [note 1]. Despite the Chinese government highlighting efforts on integrity and anti-corruption, the BRI has often been associated with opaqueness, corruption, and the absence of local stakeholder participation. One significant and consistent challenge for researchers and civil society organizations is the lack of information about Chinese investments in local languages. For example, our partner in Cambodia found that they could obtain more information in Mandarin than in Khmer. The shortage of reporting on Chinese investments in local languages is a common obstacle for local stakeholders who want to know more about the BRI projects.

The lack of transparency of many BRI investments may mean that many of these financial flows could be construed as Corrosive Capital--financing (whether state or private) that lacks transparency, accountability, and market orientation. Typically originating from authoritarian regimes, Corrosive Capital exploits and manipulates governance gaps to negatively influence recipient countries’ economic, political, and social environment, and exacerbate rampant corruption from which many countries already suffer. At CIPE, in partnership with local think tanks, we are developing strategies to neutralize the negative impact of Corrosive Capital.

CIPE and its partners have been working to (1) map out the investment landscape and the economic footprint of Corrosive Capital, and (2) identify governance gaps that have been exploited and widened by Corrosive Capital. The BRI Monitor (www.brimonitor.org) is the third step – a tool to encourage greater transparency and accountability to ensure that investments are constructive, not corrosive.

Aiming to promote transparency of the BRI investment, the BRI Monitor includes descriptive case studies and a transparency heatmap of selected BRI projects from five countries: Cambodia, Malaysia, Myanmar, the Philippines, and Papua New Guinea. In order to consistently evaluate the transparency of selected projects across the Asia-Pacific region, the group adopted the Infrastructure Data Standards set out by the CoST – the Infrastructure Transparency Initiative. These 38 data points are the most common ones already disclosed by many governments and would be helpful for tracking the project’s progress. They include basic information about the project summary, such as background, the project’s scope, the cost, the timeline, and the process of project planning, procurement, and implementation.

Each partner organization selected four projects in its country based on available data and salience to both the recipient country and China. For China, BRI projects often support a key strategic industry (like telecommunications or hydropower) or maintain the Chinese government’s interest in accessing resources and securing overseas markets. For the recipient countries, these cases are often viewed or portrayed as critical to their future development. BRI programs are often among the biggest projects in the country in terms of value or are highly contested by the public, allowing partners to identify and prioritize the most egregious gaps in governance. Partners also aimed to select cases that represent different methods of Chinese involvement with the provision of public infrastructure in recipient countries: SOE-to-SOE cooperation, public-private partnerships, and local procurement processes using funding from Chinese loans.

After selecting their cases, the partners created a transparency heatmap by scoring the information disclosure level based on the 38 data points mentioned above. 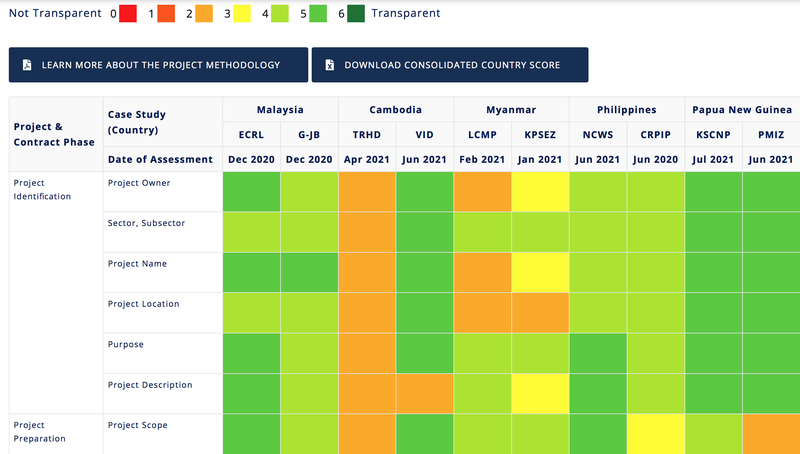 Overall, the transparency heatmap has revealed that public information disclosure is limited, reducing transparency into project cost, scope, and impact. For example, some information only exists in Chinese, thus the data is inaccessible and unreadable for local researchers. Case studies show a few common challenges associated with large infrastructure projects: noncompliance with local laws or regulations, absence of local stakeholder consultations, and a high level of financial exposure through public-private partnerships (PPP). Corruption and the use of legal loopholes are also prevalent. In addition, the Chinese government and its SOEs often use projects to maintain a favorable relationship with local political elites in recipient countries irrespective of who is in power. However,a case study done by the Institute of National Affairs in Papua New Guinea (PNG) discovered that the Chinese government prevented one Chinese company from participating in a tendering process because the company was involved in a corruption case. While one could perceive this interesting finding as demonstrating that China is keen to support clean business behavior overseas, one of the two main contractors that ultimately won the bid – China Jiangsu International Economic Technical Cooperation Corporation – has been debarred by the World Bank for fraud case in Ethiopia.

While the capital flows from China can help fill critical infrastructure gaps in Southeast Asia and the Pacific, it is critical that recipient countries mitigate governance risks to avoid the corrosive potential of opaque investments. This will allow countries to accept needed foreign investment while also safeguarding the rights of local populations and preserving an equal economic playing field.

Local civil society can play a crucial role by demanding greater transparency and pushing for the closure of gaps in implementation and regulation that are highlighted in the BRI Monitor case studies and heatmap. The BRI Monitor will encourage more government agencies to publish information about Chinese-funded projects. Finally, by highlighting consistent transparency gaps in BRI projects across the region, the BRI Monitor project could also push Chinese entities to engage in more transparency disclosure of project information. As China would also like to see the BRI succeed, it is in China’s interest to work with recipient countries to proactively disclose more information.

[note 1] Some within the Chinese government may hold an extensive view of the initiative: “any project which is in line with the Five Connectivities (trade, infrastructure, policy, people to people and capital),” can be “broadly regarded as a BRI project.” While some of the projects investigated as part of the BRI Monitor precede the 2013 announcement of the BRI, they have been retroactively described as BRI projects by Chinese officials, the recipient country, or both.

Acknowledgement: The BRI Monitor is a collaborative effort by five civil society organizations in Southeast Asia and the Pacific - the Institute for Democracy and Economic Affairs (IDEAS) of Malaysia, Stratbase Albert Del Rosario Institute (ADRi) of the Philippines, Sandhi Governance Institute (SGI) of Myanmar, the Future Forum of Cambodia, and the Institute of National Affairs (INA) of Papua New Guinea - to promote transparency and accountability in major infrastructure projects funded through the Belt and Road Initiative (BRI).