The content is also available in the following languages: العربيّة 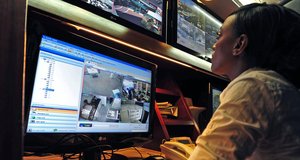 In this context, the opaque global surveillance technology industry, and the human rights implications of its products and services for migrants, asylum-seekers and refugees, are increasingly cause for alarm. At the hands of repressive regimes, such as many in the Middle East and North Africa (MENA), the consequences of these technologies can be even more extreme – resulting in fundamental losses of privacy, dignity and autonomy, and entrenching inequality between citizens and those forced to flee their home states. There is an urgent need for governments, surveillance technology companies and the investors who fund them to halt this trajectory through improved transparency, robust human rights due diligence and support for regulation of a lucrative industry whose profits can be linked to human rights violations of vulnerable groups.

This briefing analyses responses to a survey conducted on corporate transparency and the human rights due diligence processes of 24 companies which have allegedly produced or provided surveillance technologies to governments in the MENA region. We further sought responses from the same 24 companies regarding specific allegations of human rights infringements in the context of border management and migration in the region. Strikingly, only five of the companies approached – Airbus, G4S, Cellebrite, IrisGuard, and Thales Group – provided any form of survey response. An additional two companies (Nexa Technologies and VideoTec) responded to abuse allegations, together with Airbus, Cellebrite and G4S. This reflection of the sector’s limited commitment to transparency – a fundamental requirement for human rights compliance for any company – is profoundly concerning.

● A lack of engagement with stakeholders, especially with civil society and those likely to be placed at risk by surveillance software deployment.

● Underperformance on ensuring grievance and remedy mechanisms are accessible to key stakeholders, including impacted communities and individuals, for when things go wrong.

In the face of the growing climate crisis, global conflict and increasing economic instability, migration will continue to rise. People on the move, particularly asylum seekers and refugees, are highly vulnerable to the rights abuses irresponsible deployment of surveillance and monitoring technology may facilitate. Governments, companies and investors should act now to ensure migration management through technology does not become shorthand for violation of the rights of some of the world’s most marginalised people.

We are calling on governments to end their trade in and use of invasive surveillance technologies and services until regulations guaranteeing their use complies with international human rights standards are in place.

Companies should halt the sale, transfer and use of invasive surveillance technologies until they have implemented robust human rights due diligence, remedy and reporting policies, which includes effective consultation with local CSOs and those affected. They should be able identify and mitigate human rights risks, and provide remedy when things go wrong for rightsholders.

Investors should strengthen their human rights policies and ensure they are in line with the UNGPs. Additionally, they should review portfolio companies that provide authoritarian governments in the MENA region with surveillance tools and products, and ensure they have evidence the company’s human rights compliance system is sufficient to address human rights risks.